Macalester College (/məˈkæləstər/) is a private liberal arts college in Saint Paul, Minnesota. Founded in 1874, Macalester is exclusively an undergraduate four-year institution and enrolled 2,174 students in the fall of 2018 from 50 U.S. states, four U.S territories, the District of Columbia and 97 countries. The college has Scottish roots and emphasizes internationalism and multiculturalism

Macalester College was founded by Rev. Dr. Edward Duffield Neill in 1874 with help from the Presbyterian Church in Minnesota. Neill had served as a chaplain in the Civil War and traveled to Minnesota Territory in 1849. He became connected politically and socially. He went on to found two local churches, was appointed the first Chancellor of the University of Minnesota and became the state’s first superintendent of public education. In leaving the University of Minnesota Board of Regents he desired to build a religious college affiliated with the Presbyterian Church that would also be open to other Christian church members. The college’s original name was Baldwin College; it was affiliated with the Baldwin School, a Presbyterian secondary school. After a large donation from Charles Macalester, a prominent businessman and philanthropist from Philadelphia, the institution was renamed Macalester College. Macalester donated a hotel, the Winslow House, as the first permanent classroom building. With additional funding from the Presbyterian Church and its trustees, Macalester College opened for courses in 1885 with five teachers, six freshmen, and 52 preparatory students.

James Wallace joined the faculty in 1887 and later became president. He helped stabilize the college’s finances and advance the institution. During his tenure, Macalester created a focus on a liberal arts curriculum.

In 2008 Macalester publicly launched a $150 million campaign. In 2009, construction was completed on Markim Hall, a new home for the Institute for Global Citizenship. Plans called for the building to qualify for Platinum certification under the Leadership in Energy and Environmental Design (LEED) system, a building rating system devised by the U.S. Green Building Council that evaluates structures’ sustainability and environmental impact. In 2012, Macalester opened its renovated and expanded Janet Wallace Fine Arts Center.

In 2020, Suzanne M. Rivera became the college’s 17th president; she is the first woman and first Hispanic person
to serve in the role. Macalester College has a long tradition of providing opportunities for students to build an international and intercultural perspective into their college education through international or domestic off-campus study. Students may propose participation from among an array of overseas and domestic programs relevant to Macalester’s liberal arts curriculum.

About 60% of Macalester students study abroad before graduation. Eleven departments require off-campus study for completion of a major.

Macalester has programs in the Netherlands, South Africa, Germany, Austria (e.g., at the University of Vienna), Singapore, and France.

Macalester is a member of the Associated Colleges of the Twin Cities (ACTC), a consortium of five liberal arts colleges in Saint Paul and Minneapolis formed to develop cooperative programs and offer cross-registration to their students. The other members are the University of St. Thomas, Augsburg University, Hamline University, and St. Catherine University. In addition to over 800 courses available on campus, Macalester students have access to all courses offered through the consortium without paying additional tuition. ACTC provides free busing among the campuses.

Macalester also has an agreement with the Minneapolis College of Art and Design (MCAD) whereby students may take one course per term there, provided that Macalester approves the course.

Macalester is committed to providing financial aid packages equal to the full demonstrated financial need of all admitted students. Two out of three Macalester students qualify for need-based financial aid. Macalester also provides merit-based scholarships to around half of all students (most also receive need-based aid). Its comprehensive tuition, room, and board fee for the 2019–20 academic year was $68,884.

The main campus newspaper is the student-run Mac Weekly, which has a circulation of up to 1,600 and was established in 1914. Almost all the newspaper staff works on a volunteer basis. Each semester the paper publishes 12 or 13 volumes, ranging from 12 to 24 pages. A satirical section, The Mock Weekly, appears in the last issue of each semester. The paper has published a magazine three times, in April 2006 and March and November 2007.

Macalester is one of only 360 institutions that have been awarded the Carnegie Community Engagement Classification for excellence in civic engagement. Civic engagement is a core component of a Macalester education and is included in its mission statement. The college actively encourages student dialogue by bringing in speakers, hosting an International Roundtable to bring distinguished international scholars to discuss emerging global issues, and hosting collective meetings such as Women of Color.

Macalester links academic learning to community involvement. In 2011–12, 16 departments offered 59 courses with civic engagement components. Each year approximately 200 students complete internships, 65% of which are in the nonprofit sector, schools, government, or the arts. Macalester also allows students to earn their work-study financial aid award while working at a local nonprofit or elementary school.

Macalester is the primary financial contributor and sponsor of the Minnesota Institute for Talented Youth, which was founded in 1967 and has its main facilities in the Lampert Building. MITY provides two different gifted education programs during the summer and one on weekends during the academic year. Macalester also participates in Project Pericles, a commitment to further encourage civic engagement at the college. In 2000, Macalester signed the Talloires Declaration, making a commitment to environmental sustainability, as well as a sweatshop pledge, making a commitment to fair-labor practices in the purchase of college apparel.

In order to be inclusive of all genders, Macalester has started an initiative to ensure access to single-stall and all-gender bathrooms across campus. It also offers all-gender housing on campus.

Macalester has a student-powered Gender and Sexuality Resource Center that aims to build a culture of resistance against all forms of oppression. It also has many active LGBTQ student organizations and groups, including Queer Union, the Trans Identity Collective, Allies Project Training, and the Macalester Out and Proud Community.

Macalester’s athletic teams are nicknamed the Scots. Macalester is a member of the NCAA Division III Minnesota Intercollegiate Athletic Conference (MIAC) in all sports except football. The Scots’ football team set an NCAA Division III record by losing 50 straight games from 1974 to 1980. Earlham College broke that record in 2018, losing 51 straight games. In 1977, Macalester set a Division III record by allowing 59.1 points per game. The losing streak ended in dramatic fashion: Kicker Bob Kaye put a 23-yarder through the uprights with 11 seconds remaining in a September 1980 game as the Scots beat Mount Senario College. The Scots left the MIAC after the 2001 season and competed as independents until 2014, when they joined the Midwest Conference. Under head coach Tony Jennison, Macalester won the Midwest Conference title, the Scots’ first conference football title since 1947. Macalester also won nine games in 2014, the most ever in a Scots season in their 121 years of intercollegiate football. The college actually dissolved the football program in 1906, pronouncing, according to The Mac Weekly: “Thoroughly aroused to the evils, real or imaginary, of this game, the public is clamoring for the entire abolition or reform on this ‘relic of barbarism.'”

Soccer has always been a popular sport at Macalester. Both men’s and women’s teams remain competitive, appearing in multiple NCAA playoffs since 1995. The women’s team won the NCAA championship in 1998. The 2010 men’s team won the MIAC regular-season championship and both the men and women’s teams received at-large bids for the 2010 NCAA Division III tournament. Both teams are well-supported by students, parents and alumni. Mental Floss cited one of Macalester sports fans’ most (in)famous cheers–”Drink blood, smoke crack, worship Satan, go Mac!”–as one of “7 Memorable Sports Chants”.

The cross-country skiing team became a club team in 2004, when skiing was eliminated as an MIAC-sanctioned sport. A women’s hockey team formed in 2000 and continues to play at the club level.

Macalester Athletics compete in the Leonard Center, which opened in August 2008. The $45 million facility encompasses 175,000 square feet and includes a 200-meter track, a natatorium, a fitness center, several multipurpose rooms, and a health and wellness center. Materials from the former facility were disposed of in environmentally friendly ways, with some incorporated into the new structure.

Every year in early May, Macalester hosts the Al Storm Games, a competition between various athletes at Macalester consisting of various events such as a Hunger Games simulation.

As at many small liberal arts colleges, students at Macalester are required to live on campus for their first two years. The college began implementing limited all-gender housing options in 2007. 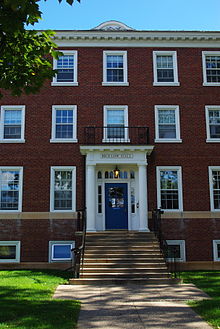 Food services on campus are provided by Bon Appétit, a national company. The cafeteria, in the Ruth Stricker Dayton Campus Center, is called Café Mac. Three different meal plans are available for students who live on campus. All freshmen are required to have the highest meal plan offered.

In April 2003, Macalester installed a 10 kW Urban Wind Turbine on campus thanks to that year’s senior class gift donating the installation cost and Xcel Energy donating the tower and turbine. Mac CARES is developing a proposal for Macalester to invest in a Utility-Scale Wind Turbine in the range of 2MW. Other projects include the Eco-House, a student residence with a range of green features and research opportunities; a rain garden that prevents storm water from running off into groundwater, a bike share program, and a veggie co-op. The Class of 2008 designated its senior class gift to a Sustainability Fund to support initiatives to improve environmental sustainability on campus and in the greater community. On January 1, 2013, Macalester started campus composting.

In September 2009 Macalester declared a goal to become carbon-neutral by 2025 and Zero-Waste by 2020. The school is a signatory to the Talloires Declaration and the American College and University President’s Climate Commitment, the latter obligating the college to work toward carbon neutrality. On April 18, 2012, President Brian Rosenberg signed the “Commitment to Sustainable Practices of Higher Education Institutions on the Occasion of the United Nations Conference on Sustainable Development”.

In 2009, Macalester opened Markim Hall, a LEED Platinum building that houses the school’s Institute for Global Citizenship. The building uses 45% less water and 75% less energy than a typical Minnesota building. Macalester is planning to remodel its Music, Theater, and Art buildings and is designing them to Minnesota B3 Guidelines.

Recent sustainability efforts have highlighted the intersection of social justice and climate change at Macalester as well as the potential conflict between its on-campus sustainability and its investments. Since 2012, students have criticized the college for making significant endowment investments in fossil fuel companies, including direct investments in oil & gas private partnerships. The student organization Fossil Free Mac has led a campaign urging the college to divest from fossil fuel companies. The campaign initially proposed full endowment divestment from the top 200 publicly traded fossil fuel companies, which Macalester’s Social Responsibility Committee rejected in 2015. In 2018, the Social Responsibility Committee unanimously approved a revised Fossil Free Mac proposal advocating a moratorium on the college’s direct investment partnerships with oil & gas companies, and the board of trustees is considering it. The divestment campaign has received significant support from the student body, student government, faculty, staff, and alumni.